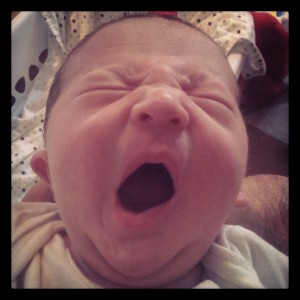 Maybe we could call it a bit of pre birth swagger.  It was all planned out.  Katrina’s water was going to break, we would call the mid-wife, wait for the contractions to be four minutes apart, then travel to the hospital, have our baby and everything would be hunky-dory.  It was going to be super smooth, with no panic or anxiety or anything else annoyingly inconvenient.  We were vets of one birth so, you know… #experts.

Eight days late, on June 25th, Katrina felt a contraction.  I, sort of calmly, started getting our bags together when screams from upstairs made it obvious that things were progressing a lot faster than anticipated.  I ran upstairs to find Katrina tenderly, whilst in the middle of rapid contractions (less than 30 seconds apart), asking me to phone the midwife.  Naturally, hiding my increasing panic, I did. “My wife has the urge to push,” I blurted out to the midwife while at the same time trying to sound controlled and ‘with it.’ “I think you need to come here.  We aren’t going to make it to the hospital.” “Phone 9-1-1,” she replied. So in a panic that I wasn’t hiding anymore, I called 9-1-1.  I got the standard “9-1-1 emergency, what is the nature of your problem?”  I went through the prompts and got transferred to the guy who would send an ambulance to our place.  It didn’t help my anxiety that the 9-1-1 guy sounded young enough to be part of my high school youth group. “Do you see the head?” he asked curiously, kinda sounding like a teenager. “No” I replied, praying to God that I wouldn’t need to deliver the baby. He assured me that help was on the way.  The four minutes of waiting for the first responders were the longest four minutes of my life.  I’m a pastor, not a midwife. The fire department got here first, just as my sister-in-law arrived to take our son Asher away from the insanity. Five firemen, who very possibly could have jumped straight out of a fireman calendar, showed up in our bedroom where Katrina was starting to push with more intensity. Their arrival provided some assurance that we weren’t in this thing alone.  A few minutes later the ambulance showed up and wonderfully offered assistance and assurance and laughing gas. It was then I got a call from the midwife imploring that we don’t take Katrina to the hospital.  It was quite possible that if she would be transported, the baby would be delivered in the ambulance.  So the midwife told me, “We want to deliver the baby at your home.” Thoughts started rushing through my mind.  But…that wasn’t part of the plan.  We aren’t ‘home birth’ people.  Those are for people who just like pain and stuff…  This isn’t the Middle Ages.  We have hospitals for a reason… Mere minutes later, the midwives showed up.  As Katrina tells it, when she heard the voices of the midwives she felt a distinct peace and relief from severe anxiety, and any doubts she had that she could not do it went away. Sure enough, Katrina was fully dilated in less than 45 minutes and the birth would be any moment.  I ran around the house looking for towels and face cloths in prep for the birth, amazingly getting direction from Katrina in-between and even during contractions as to their location. By this time the fire department took their leave and left the delivery to both the midwives and the paramedics, and I took my rightful place as cheerleader and could finally concentrate on things like ‘not passing out.’ It was super hot and sweaty in that room.  The pushing led to crowning, crowning led to the final push that saw our baby come into this world with a chorus of “amazing’s” and “wow’s” from the paramedics.  Amidst the tears of pain, joy and relief, Katrina’s first words to our baby were, “You are in big trouble Mr.”  I was completely numb, but head over heels for this little baby.

With distinct bravado Katrina gave birth to a 8lbs 15.5 oz baby on our bed at 2:22pm on June 25, 2013. I will never look at my mattress the same way again.  Even though it is clean, I think I still want a new one. The placenta, in garbage bags, ended up in my laundry hamper. I was wearing a Bayern Munich soccer jersey during this whole thing.  For some reason I thought that was cool. There were eight people in our room in total… crazy.  I had dirty laundry all over the place. I had the duty of taking all the ‘stuff’ from the birth event, which was in garbage bags, to the garbage dump at our complex.  Unsurprisingly, there was a curious crowed of neighbours gathered outside our place, and it was a joy, while holding the messiness of child birth in a garbage bag in my hands, to announce that we had a healthy happy baby named Deklan and that both baby and mom were doing great! We are thankful to the paramedics, the Mission BC fire department, and our midwives Tanya and Sharon for exuding professionalism and class during this whole ordeal.  We will always be indebted to them. Even now, writing this with my oldest son Asher on my lap, I struggle to find the depth found in this story.  It seems that all I know is that I love Deklan just as I love Asher.  The other day, I was holding Deklan in my arms and I imagined telling him the story of his birth when he is older.  I will likely add more dramatic elements like aliens, or the sublime heroism of his dad, but in telling this story I hope that he will know his parents and older brother love him.  I guess that is where the depth of this story is found, in the love.  It is a depth that will grow deeper still, and be rooted in the crazy events of June 25th, 2013.  Thanks be to God.