We live hundreds of miles from our closest relatives, which means that my son only sees his grandparents, aunts, uncles and extended family one or two weeks every year. He’s the only grandchild on my husband’s side, and the only one of his generation—which means my husband’s aunts and uncles also lavish him with gifts and attention.

Every time we visit, or every time they visit us, my son receives the royal treatment from the time we arrive until the time we leave. His wishes for food, playmates, outings and more are matched in a moment. I worry that he’s getting spoiled, but console myself that it’s just for a short time. After all, aren’t grandparents supposed to be allowed to give kids junk food and trinkets? They want him to know that he is loved, treasured by them.

However, the longer we stay, the more my son comes to expect that kind of treatment. Rather than waiting to be offered something, he’ll announce that he wants some ice cream. Then, rather than following nervously behind into the kitchen, he sits and waits to be served. I even heard, “I wish I had more of these guys,” escape his lips in grandma’s hearing, referencing a set of collectibles he adores. This is not the child I live with the rest of the time. It is certainly not the child I aspire to raise. It’s troubling how quickly he makes the turn from humbly questioning these indulgences to expecting them.

During our visit, my husband came across this powerful video about privilege and shared it with me. I encourage you to watch it. Social scientists studying inequality have discovered, in experiment after experiment, that people who are given privilege or advantage or wealth, no matter how arbitrary the gift, quickly come to believe that they deserve it. They also come to believe that others don’t. Having more than others somehow convinces us that we are better, smarter, more adept or more deserving.

Also during our visit, the verdict was announced in the case of George Zimmerman, who shot 17-year-old Trayvon Martin who was carrying nothing more than Skittles. I have written at greater lengthabout the case, but the story of Trayvon Martin reminded me first and foremost of privilege. My son will enjoy a great deal of privilege in this world, way beyond extra ice cream and baseball cards. His fair skin and blonde hair will protect him from judgment faced by his peers. His educated parents, middle-class comforts and facility with English will open opportunities others do not share. His gender will be a boon, not a barrier in school and in work.

One of my favorite sayings comes from the late Ann Richards, who said it in reference to George W. Bush: “He was born on third base thinking he hit a triple.” While my son won’t have quite the advantages of a Bush, he will have some real advantage in this world. How do I keep him from an accompanying sense of entitlement? How do I help him understand the complexities of privilege? How to I teach him compassion? How do I teach him to recognize when those around him are receiving prejudicial treatment, and then intervene to stop it? How to I keep him from being “spoiled rotten”? 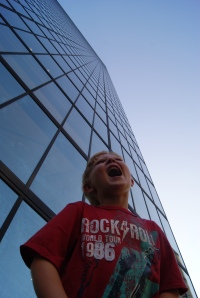 Unfortunately, I don’t think telling his grandmothers to stop feeding him so much ice cream is the answer. That would be easy by comparison. Instead, teaching compassion, understanding privilege and learning humility is a lifelong process—and a spiritual one. It requires examining my own privilege and talking openly about the legacies of prejudice around race, sex, and sexuality. It demands an openness to questions about wealth and poverty, and the privileges they create. It will insist upon confession and humility—mine, not his.

Thankfully, our Christian faith is full of stories that teach just these ideas. Jesus tells the rich young man that he must sell all his possessions and give them to the poor, which is about getting the man to recognize his privilege and releasing himself from it.

He has scattered the proud in the conceit of their heart.
He has put down the mighty from their thrones,
and has exalted the lowly.
He has filled the hungry with good things,
and the rich he has sent away empty.

Even more importantly, the very heart of the Christian story is about giving up privilege in order to show love. The very God we worship forsook the power of divinity to live and dwell among us in human form, even dying on a cross in the name of love. It’s clear in the scriptures that God’s love and Christ’s sacrifice have nothing to do with our deservedness. The heart of Christianity works against any claim of privilege, superiority or deservedness. God rains down endless grace and love—not just to a few of us, but to everyone.

As I struggle to teach my son the ways of compassion and humility, the circumstances are both profound (“People are mistreated because of the color of their skin.”) and mundane (“No ice cream. You’re not at grandma’s house anymore.”). I am grateful for a faith tradition that grounds my small corner of privilege and parenting in a larger story that I can claim to both chasten and console. I am even more grateful for a God whose love pours out freely, whose justice flows like waters, and whose grace is unending.

3 thoughts on “Teaching My Child About Privilege”