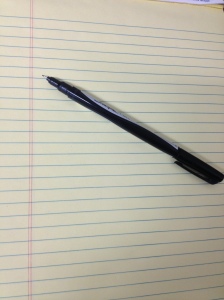 An idea I brought to the family a few years ago,  revolved around the concept of “margin.”

Raising five children, I quickly realized that I needed help. When they were younger, things like dinner didn’t always happen at nice, tidy times. Baths, getting dressed, ready for bed, wake and sleep schedules, nothing seemed to neatly line up. As they grew some parts of parenting became easier: they could shower or bathe themselves, they could get dressed alone (and they weren’t as bad at matching as I sometimes was). I learned about the idea of “margin.”

When you look at a piece of standard, lined school paper, you’ll see on the left side, a red line indicating a margin. Faintly, from below, you can see the same red demarcation on the right for the opposing margin. These permit writing that can sometimes stray slightly outside the lines to add in forgotten words, corrections, or making marginal comments separate from what was written. Dr. Richard Swenson offered an idea of introducing margin to contemporary lives.

To keep that sanity in time, finances, and knowing my children as they grew, I instituted certain objectives in our daily/weekly lives.

First, every child had a day where they helped prepare dinner. With five kids and five weeknights, it worked out nicely. The expectation of help varied from night to night and their skills, but it became a regular activity and an opportunity to spend time together.

Second, no more than two children could be involved in after-school activities per semester. I had heard from friends who had fewer kids and more activities that they could scarcely catch their breath. I decided that two nights a week left 5 nights where we could reasonably anticipate family time.

Third, we started having a family night on Fridays where we would have an evening without other agendas. Once dinner was finished and the kitchen tidied, we would begin a Sabbath together to last until Saturday night. During this time we would play games, watch a movie, read, or make desserts, whatever seemed fitting for the time.

Fourth, we turned off computers and music about an hour and a half before bedtime. Unless homework needed to be completed, I called it “screen time” and announced its end so that other things like books, conversation, and getting ready for bed weren’t interrupted by “just five more minutes” of television.

The overriding emphasis in all things though was love. If by keeping a family night, or avoiding an activity, the outcome was harshness or something unloving, then it was abandoned. I could see no sense in trying to develop relationships with my kids and being unloving at the same time.

As they grow, I hope they learn that having margin preserves sanity, relationship, and love. Sometimes it means saying “no” to perfectly legitimate and good activities to keep time, energy, and opportunity open for other, better ones. But in the end, having breathing room is worth it.