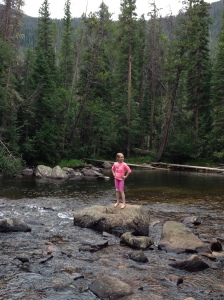 A few years ago, my daughter’s school had a talent show, and my then-first-grader Elanor wanted to dance in it. Not because she took dance lessons and was really good at it, and not because she’s loud and showy; she hasn’t ever had any lessons, and her voice is soft and high-pitched, and you have to listen quite a long time before she gets to the end of the sentence. She has a lithe, graceful body, and I suspect everyone at first judges her to be a mouse. But she wanted to dance for the entire student body, so she auditioned in front of some teachers. And they accepted her entry.

Truth be told, I was mortified. I had tried to dissuade her from even trying out, but couldn’t really think of a good reason to forbid it. I watched her rehearse her dance a grand total of three times in the living room, if you count the one time before the audition. She chose the B-52s song “Planet Claire,” and she sort of made up her (possibly tiger-inspired?) moves on the spot. It was bizarre; it looked avant-garde. No other girls would do a dance like that. And I imagined the bigger kids and her classmates would raise their eyebrows and laugh at her, and their parents would wonder why her mother didn’t get her some REAL dance lessons. I was terrified for her to make her uniqueness so public.

She didn’t lose her courage. Instead, she dressed up in her flippiest black skirt and orange tank top, and she thoroughly enjoyed her performance – while I sat in the back of the gymnasium with the other parents and wondered, “What are they thinking (of me)?” At least four other girls sang “Baby You’re a Firework” for their talent-show entries after Elanor blazed across the sky. It never occurred to her that she should be scared. I, on the other hand, was squeezed by enough fear for both of us.

My own insecurities kept me from being proud of this fearless daughter of mine at first. I did come around eventually, though – until this past summer, when she took issue with a behavior contract she needed to sign for a summer arts camp. She read every clause in the contract and told the director and me that she didn’t think she could sign it, because there were some things she didn’t agree with. For example, she was supposed to promise that she would walk everywhere in the building, but, she said, “I prefer to sashay.” The director said they could accommodate that along with Elanor’s other concerns. Meanwhile, my nasty, stage-whispery alter-ego was spitting, “Just do what they say! Stop sticking out so far! Just stop making a big deal!” I covered that nasty alter-ego’s face with a pillow till we got out to the sunshine, somehow managing to keep the damage under control.

I’m pretty sure this is a(n obvious!) lesson I am supposed to learn. You should pay attention to things that affect you intensely in your spirit, according to James Martin, SJ, author of The Jesuit Guide to (Almost) Everything; he says most likely God is communicating with you through those intense things.

And then a friend pointed me to this sermon (http://covenantbaptist.org/sermons/women-we-are-bent) about a story in the Bible, in Luke 13:10-17. In this story, there is a woman who “was bent over and was quite unable to stand up straight” for 18 years. Jesus calls her to him and declares her set free from her ailment. She immediately stands at her full height and begins praising God. It strikes me that my daughter, at nine years old, is still whole; she has not learned how to bend herself over and fit into the customary box our culture has for her. The kingdom of heaven belongs to such as her. I, on the other hand, have been bound by this spirit of smallness for more years than I can count.

Jesus comes to me in the guise of a spunky girl named Elanor who doesn’t care whether she fits people’s expectations. He wants me to be whole, too, a healing that may take the rest of my life but is also true now, somehow, and he says: I never meant for you to keep quiet, or to fit in, or to be so small. You are not bent anymore! Stand at your full height; that is my kingdom coming in your life! You are set free!

Rachel Andresen is married to a nonconformist and has two nonconforming kids, whom she now homeschools. She is in the middle of an apprenticeship to be a homebirth midwife.

5 thoughts on “To Dare to Dance: How My Daughter Teaches Me Courage”