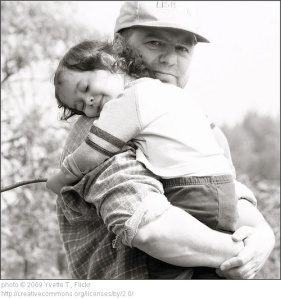 Last year, I went through the Love & Logic course. For what it’s worth, I think this is the only parenting curriculum out there worth your time. I encourage all parents to at least give it a try.

One of the aspects of Love & Logic is called the “Empathetic Response.” It is a trick that seeks to make the consequence of a behavior the “bad guy” instead of the parent. For example, let’s say a child is not careful with a favorite toy and it breaks. The tendency is for parents to get upset along with the child and say things like, “See, I told you you were going to break it!” But the empathetic response says, “Oh, that is a bummer, I know you liked that toy.” The consequence doesn’t change, but the response does. It can work with imposed consequences as well. Let’s say a child yells at or hits a friend they’re playing with. As parents we want to yell, “I can’t believe you hit your friend! Go to your room!” The empathetic response says, “That’s a bummer that you’re not going to be able to play anymore today.” The consequence doesn’t change, but the response does.

At the beginning, I remember being the most skeptical about this aspect of the philosophy. When I heard the word “empathy,” the stressed-out, frustrated parent in me probably had thoughts like, “My kids don’t deserve empathy! They’re making my life hard…often on purpose!” The word empathy sounded like some kind of weak response to the defiance and fit-throwing parents put up with. It’s only when you try it that you realize that it’s far from a weak response but requires a lot of effort and emotional maturity. It’s not at all about softening up or backing down but offering a sense of loving understanding while allowing or imposing appropriate consequences.

But this empathy thing has a much more vital purpose when it comes to our relationship with our children. The Love & Logic website explains: “The child must ‘own’ his or her pain rather than blaming it on the adult, and the adult-child relationship is maintained.” As children learn that the parent will not back down or excuse bad behavior, they must also learn that the parent loves and cares for them and is sensitive to their feelings. Children with no one in their lives showing this love and care can quickly become hostile and use withdrawal or bullying to protect themselves from their unacknowledged emotions.

But whenever I succeed at showing empathy (which is not often), something else happens. It not only shows my children I love them but also teaches me something about loving them. It allows me a chance—should I take it—to step into their shoes and realize that a lost toy IS a huge deal in their world. Without empathy, we communicate to our children that their feelings and emotions don’t matter. ‘If only they knew what adult problems were like,’ I think to myself. When do their problems become “adult” enough to merit recognition? Am I wishing adult problems on them?

Here’s the really crucial part: early empathy with little kid problems like lost toys or not wanting to go to bed sets the foundation for when they start having big kid problems, which is starting to happen in my house. Both my children have now experienced the grief associated with a friend or beloved adult moving away. When life begins beating them up, as it inevitably will, what dad will they expect to find? The dad who added insult to injury when consequences are doled out, or the dad who shared their sadness about the lost toy and is now right there for the lost friend?

The disciples thought that Jesus was too busy for the concerns of little children. But Jesus famously said, “Let the little children come to me, and do not hinder them, for the kingdom of God belongs to such as these.” It is clear that this is not just a begrudging concession limited to the physical space allotted them. Jesus was welcoming the children and everything that comes with children. Their quirks, their immaturity, their pettiness, and their little kid problems. Someday—hopefully not too soon—those little kid problems turn into big kid problems. May they learn early on that they will always find a place on Jesus’ lap…and mine.