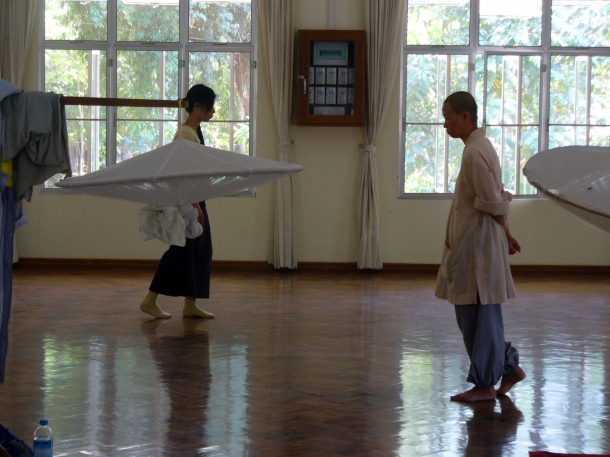 If you’re reading this in a public place, look around at people walking. Otherwise, imagine someone walking through the room where you are or past where you’re sitting. How fast is the walker (real or imagined) going? Normal pace? A little brisk, perhaps? Now take what you just saw and imagine slowing it down by at least 20 times into super slow motion. Like, painful super slow-mo. Imagine the walk being reduced to a pace that is so slow that you have to watch for at least 15 seconds to realize that the person is actually in motion.

Here in the states, we would never see anyone walking that slow in real life. But during my visit to Myanmar (formerly known as Burma) earlier this year, I saw that slow-mo pace in real life, in real time. It’s called “walking meditation,” and it’s part of the practice of an observant Buddhist. We usually think of meditation as sitting in the lotus position, but there is a version of meditation that involves walking. Very, very slow walking. One step every minute or so, not making a sound, with nothing above the waist moving. Barbara Brown Taylor described it as like watching a lunar eclipse.

The point of it, of course, comes back to the self-centering discipline of meditation. As boring as it would have been to watch for a long period of time, I remember being amazed and not wanting to go in the room or do anything to disturb them, but our guide insisted we enter. As I watched and snapped a picture, I remember thinking, ‘When you walk that slow, you must notice every little thing. Every faint noise, every detail of the room, every breath you take.’

Taylor, in her book An Altar in the World, has several of those passages that hit too close to home and leave the reader saying, “Ouch.” The biggest ouch moment, for me, was when I read these words in her chapter about “walking the earth”:

Among the hardest walkers for me to watch are small children being hauled along by their wrists…The child has perhaps only recently learned to walk, so she still knows how. She feels the heat radiating up from the sidewalk. She hears the tapping of her shoes on the cement. She sees the dime someone has dropped in the crosswalk, which she leans toward before being yanked upright again. The child is so exposed to the earth that even an acorn underfoot could topple her…But the speed is too much for her. Her arm is stretched so far it hurts. She has to run where her adult walks, and if that adult is talking on a cell phone, then really, she might be better off in jail.

I’ve been that yanker and hauler. Sometimes I genuinely have to…but less often than I think. I am so Type A and so conditioned by the American sense of time that some days you would think I’m running from a swarm of bees. “Come on, we’re late for school!” “Buckle in already, I’ve got stuff to do!” If my children possessed abstract thought and language, they might ask something like, “Dad, what is this destination to which you’re moving so quickly but never seem to reach?”

My son especially is like the child in Taylor’s quote who notices the dropped dime. He’s 6 now, but ever since he was a “wobbler,” I’ve been amazed at how observant he is; he notices everything. Whenever I’m trying to remember someone’s name, what they were wearing, or where something is in the house, I can usually ask him. My wife and I have often looked at each other in amazement over the mínute details he observes and remembers.

It is a travesty that my hurry-sickness has tried to rob him of that. The hyper-connectivity with his surroundings that he and other children possess is a gift that I treat as an annoyance.

A former Virginia Baptist leader named John Tadlock once wrote a book called When It’s Rush Hour All Day Long. In the book he offers a self-diagnostic tool to help determine if you are “hurry sick.” I first read the book long before I had children, and even then I remember thinking, “All these things are true of me.”

Tadlock identifies three major costs of hurry sickness: 1) shallowness, 2) erosion of intimacy with God, and 3) erosion of our capacity to love. Indeed, it’s not just dimes on the road that we miss when we walk too quickly, but people.

This is where we realize that spiritual practices can go far beyond an introspective activity that yields only individual benefits. When I manage to “walk properly,” as Taylor would say (which is more than simply slowing down), I can not only nurture my own spiritual connection with God and creation, but it also benefits my children by leaving their arms in the socket.

Actually, it does much more than that. Walking, observing, and engaging at my child’s pace—even if I can’t do it all the time—is really the only way to engage them at their level and in their world. It is my opportunity to make God and His creation come alive in real time. Besides, God is trying to use my children to teach me. To notice my surroundings. To recognize simple beauty. To see Him. I found myself praying, “God, what would it take?” My children still know how to observe their world. They want to stop and laugh at the squirrels chasing each other. They want to stop and ask to pet the dog or satisfy their curiosity about a child’s toy.

I’m not sure walking meditation is for me. But something tells me that if I took the time to walk at their pace every once in a while, I would see a lot more. My children need me there—present enough to see what they see—to help them become conscious of the living God. Their wrists and shoulder joints will be better off too.