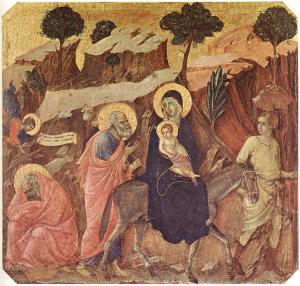 Now after the wise men had left, an angel of the Lord appeared to Joseph in a dream and said, ‘Get up, take the child and his mother, and flee to Egypt, and remain there until I tell you; for Herod is about to search for the child, to destroy him.’ Then Joseph got up, took the child and his mother by night, and went to Egypt, and remained there until the death of Herod. This was to fulfill what had been spoken by the Lord through the prophet, ‘Out of Egypt I have called my son.’

When Herod died, an angel of the Lord suddenly appeared in a dream to Joseph in Egypt and said, ‘Get up, take the child and his mother, and go to the land of Israel, for those who were seeking the child’s life are dead.’ Then Joseph got up, took the child and his mother, and went to the land of Israel. But when he heard that Archelaus was ruling over Judea in place of his father Herod, he was afraid to go there. And after being warned in a dream, he went away to the district of Galilee. There he made his home in a town called Nazareth, so that what had been spoken through the prophets might be fulfilled, ‘He will be called a Nazorean.’

Go ahead, judge me. I left out the middle section. To be fair, that’s how the Roman Catholic lectionary does it. Or I could say I omitted the verses titled “The Massacre of the Infants” because there are doubts about its historicity. But to be honest, I think these scriptures are hard enough as they are, without the additional terror of that part of the story.

I understand, though, that that choice has consequences. Namely, it implies that we ought to focus on the danger facing Jesus, while suggesting that it’s perfectly acceptable to ignore the very real threat and harm that comes to so many other children. Actually, put that way – I don’t know that that’s an acceptable consequence … Fine – you make the call for yourself and your children. Should you want it, here’s the rest of the story, meant to be read in between the two sections above:

When Herod saw that he had been tricked by the wise men, he was infuriated, and he sent and killed all the children in and around Bethlehem who were two years old or under, according to the time that he had learned from the wise men. Then was fulfilled what had been spoken through the prophet Jeremiah:

‘A voice was heard in Ramah,
wailing and loud lamentation,
Rachel weeping for her children;
she refused to be consoled, because they are no more.’

And it all gets conflated, right? Who are Rachel’s children? Are they from a long time ago, like, when Rachel’s own story happens, in Genesis? Or are they these children from Matthew’s story, who become Herod’s victims? Is every child Rachel’s child?

So to present readers with this text – and at Christmastime, no less – is to issue a profound challenge. In this season, when so much of our energy is wrapped around our own families, our own loves, our own desires, this text refuses to let us stay inwardly focused. In some ways, it says: “Even if you escape the nightmare, there are others who live (and die) in it. You must not forget them.”

Of course, the gospel author couldn’t have known that the birth story he crafted would one day provide the backdrop (however loosely) for the celebratory season we have made Christmas, but it’s happened this way. So how do we let the text speak to us now? How do we celebrate Jesus’ birth – and give thanks for his safe escape from (this) danger – while remembering all of the children whose stories don’t have an angel appear to steer them clear of harm? And how might that remembering move us to make a better world for all people?

-Why do you think Joseph believes the angel? Why does he leave, and then return? How do you think you would respond if you got a message like that?

-Have you ever learned anything from your dreams? Do you act on your dreams when you wake up? If so, share a story of that. If not, why not?

-What are some dangers that face kids today?

-Where are some places you know are safe? What are some ways you can help to make other places safer for all kids?

Spread out a map in front of you – or, if you don’t have one, draw one. Or print one, maybe from here.

Ask each member of your family to choose a country. You might want to mark your choices with stickers or small stones or game pieces. If you want, spend some time learning about what life is like for children in the place you chose, and report back to your family about what you discover.

Say a prayer together for the children you have learned about, and for people all around the world.