He bounced with excitement as he asked me if he could go write our nametags. I had my hands full with his already-cranky brother, wondering why on earth I bothered bringing them to church alone, without any help. So of course, I said, of course.

And he took off running.

Only after I’d wrangled the cranky toddler and settled us down with a stack of books did I realize how long he was taking. Ten minutes passed, one lector up, another lector down, and still we sat waiting. Finally he tore back across the gathering space with three nametags clutched in his marker-smeared hands.

This is for you, he slapped one on his brother’s back.

And this is for me, he spread another across his own chest.

And Mama, this is yours. 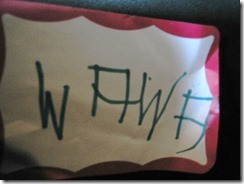 I didn’t know whether to laugh or cry. Priceless. His first public rendering of my name, and it proclaimed “WAWA” for all to see. I peeled back the sticker and placed it proudly on my shirt.

Little did I know his preschool penmanship would prove prophetic.

The boys’ behavior went from bad to worse as the hour dragged on. Kicking, screaming, throwing and tantruming. None of my tried-and-true tricks made one ounce of difference. By the time we got to the “Our Father,” I slouched in the pew, maturely refusing to hold anyone’s hands including my children’s, instead mentally planning our escape.

I dragged them up to communion and then dragged them right out the door into the parking lot, hot tears stinging my eyes as I hissed to myself that I was Never Ever Ever coming to church with them solo again.

But when I pulled the nametag off my shirt as I put the car in gear to drive away, I caught myself for a moment. Instead of crumpling it up and tossing it aside as I’d already done with the morning, I slowly stuck the sticker onto the cup holder of the car’s console. I had no idea why I did it. It started back up at me with stark Crayola boldness. 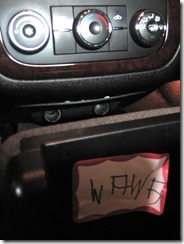 WAWA. Or was it MAMA? It appeared the choice was mine to interpret.

So it was a rotten Sunday, smack dab in the middle of three long weeks of solo parenting. But the one good thing that bad day brought me was the realization that I had a choice in how I lived out the rest of my month. I could waa-waa my way through my double-duty, second-shift, all-mom-all-the-time parenting. Or I could mama the way I wanted to. The way my kids wanted me to.

The choice was mine.

Part of me wanted to waste the rest of the month away in a sea of complaining and chocolate and Chardonnay. But part of me knew that just like an optical illusion, I had the ability to shift my perspective depending on what I tried to see.

So I kept that nametag stuck on the console all week, as we cruised around to preschool and playdates, to the grocery store and the gas station, through dark-cloud mornings and sunny afternoons.

And all week, whenever I felt tempted to waaaaaaa my way through a long day with little ones, I remembered that I had a boy’s best attempts at capital letters to live up to. So I mama-ed up and try to make it happen. Tried to make the best of what I’d been given.

Which, I remembered, was a whole lot.

The more trips I take around the sun, the more I become convinced that the spiritual life is mostly about two things: paying attention and shifting perspective.

It’s about seeing the abundance of grace in small moments.

It’s about reframing my vision to remember God.

Whenever I do these two things – see differently and re-member myself back to the God who is love – it’s no exaggeration to say everything changes. Or at least all the important things change.

These two practices remind me of how to be in right relationship with all that is around me: my God, myself, the people who challenge me, the tasks ahead of me.

Every day I am faced with opportunities to do one or the other. To take notice of the deeper truth before me, or to barrel ahead ignoring what really matters. To change my patterns of thinking, or to stick with narrowed tunnel vision.

This is not to say the choice is always clear or that I always make the right one. But the times I do, I am surprised to rediscover how way opens before me.

It is the way to live up to that which I have been called. And named.

Laura Kelly Fanucci is a Catholic writer and mother of two (plus one due in May!) who blogs about spirituality and parenting at Mothering Spirit, where this post originally appeared. She is a Research Associate with the Collegeville Institute Seminars at Saint John’s University in Minnesota.

One thought on “Mama or “Wa-Wa”? The Choice is Yours”