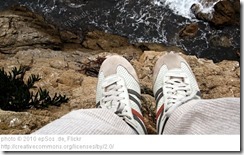 I recently heard Amy Bulter, pastor of Calvary Baptist Church in Washington, DC, say, “As a culture, we seem to walk around with a kind of PTSD.”

She was in no way diminishing the serious, psychological diagnosis PTSD, but she was observing that our culture as an emotional system, especially since Sept. 11 and the economic recession, has become more fearful and guarded.

I think this is true, but there is also plenty in the life of an individual that can make us afraid. The longer we live and the more we see, the more we have to be afraid of.

Part of the problem, though, is that we don’t often recognize fear. We mistake it for something else. The best example I know is in my work with couples. When I do relationship counseling with a couple in trouble, I always start with a reflection exercise that takes them back to their childhood. Even though we like to think of our past as something we’ve moved on from, it almost always holds the secrets to our behavior today. In troubled relationships, fear has taken over, but it’s rarely recognized as fear. An example: a woman’s father often criticized her and she was always afraid of displeasing him, so she now reacts in anger whenever she feels criticized by her husband. The husband is surprised by what she interprets as criticism, and she does not realize that she is still afraid of displeasing the men in her life.

In fact, I would go as far to say that wherever there is anger, there is hidden fear.

So here’s the theory turned on me as a parent: The times I overreact or become the angriest at my son’s behavior is when he is acting just like I did. I am afraid he will turn into me.

I have a daughter, too, but you know how it is, right? I’m a man, and I have one son, so he’s kind of like my special project. There are some key ways that I don’t want him to be like me. As a child, I had serious anger issues and did years of play therapy. I was as stubborn as they come and could wear my mother down. I was also intelligent, and school work did not often require a lot of effort. When it did, I had no patience for it and acted out.

That’s just for starters. But at 6 years old, my son is already becoming exactly like me. OK, not exactly and not always, but it has been enough to churn up a sense of dread to make it so that I can’t always keep a level head. I’m afraid. I’m afraid he will make the same mistakes I made and go through the same things I did, and I don’t want him to.

For me, one of the Bible’s biggest “easier said than done” passages is Jesus’ words on worry (which is a form of fear). “Can any one of you by worrying add a single hour to your life?…But seek first his kingdom and his righteousness, and all these things will be given to you as well. Therefore do not worry about tomorrow, for tomorrow will worry about itself. Each day has enough trouble of its own.” (Matthew 6:27, 33-34). The author of 2 Timothy must have known how easily young people can succumb to fear, and he wrote to Timothy, “For the Spirit God gave us does not make us timid, but gives us power, love and self-discipline.” In fact, the Bible contains countless injunctions against fear, as in Isaiah 41:10, “So do not fear, for I am with you; do not be dismayed, for I am your God. I will strengthen you and help you; I will uphold you with my righteous right hand.”

As we read such passages it becomes clear that God commands people to put away their fear. But it’s not just because fear is no fun or that it displays a lack of trust in God. Fear actually hinders us from that which we seek. Our own trepidation may be the catalyst for the outcome we don’t want, especially when it comes to parenting.

When Franklin Delano Roosevelt famously declared in 1933 that “the only thing we have to fear is fear itself,” he was speaking to a public that had every reason to be afraid. The Great Depression had paralyzed the country, sending once self-sufficient families to the streets with no resources and no hope. But he knew that the country could hold itself in a standstill with its own fear, and that recovery was dependent on courageous action. In that same speech, he urged the American people to recover the “spirit of the pioneer.” “It is the way to recovery. It is the immediate way. It is the strongest assurance that the recovery will endure,” he said. In other words, courage was the best way to try to avoid the very things they feared. In their case, the fear was continued joblessness, family hardship, etc.

As a parent who has to watch my children make their own mistakes, it’s not that I don’t have a reason to be afraid. It’s that the way I respond when I’m afraid carries the highest likelihood that what I fear will actually come about. Emotionally-charged responses from parents to undesired behavior typically only exacerbates things.

Here’s the funny thing: my son and I have our emotionally-charged moments for the same reason…we both want control that we don’t have.

So I pray for you and I that we will continue on in courage. After all, a lot of this fear I have comes from my own delusion that the world’s future depends on me getting it right all the time. As it says in 2 Timothy, this spirit of fear is not from God, who has told us to “seek first the Kingdom.”