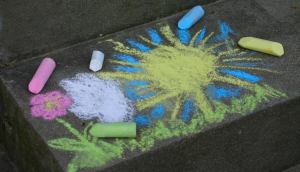 As he walked along, he saw a man blind from birth. His disciples asked him, “Rabbi, who sinned, this man or his parents, that he was born blind?” Jesus answered, “Neither this man nor his parents sinned; he was born blind so that God’s works might be revealed in him. We must work the works of him who sent me while it is day; night is coming when no one can work. As long as I am in the world, I am the light of the world.” When he had said this, he spat on the ground and made mud with the saliva and spread the mud on the man’s eyes, saying to him, “Go, wash in the pool of Siloam” (which means Sent). Then he went and washed and came back able to see.”

The neighbors and those who had seen him before as a beggar began to ask, “Is this not the man who used to sit and beg?” Some were saying, “It is he.” Others were saying, “No, but it is someone like him.” He kept saying, “I am the man.” But they kept asking him, “Then how were your eyes opened?” He answered, “The man called Jesus made mud, spread it on my eyes, and said to me, ‘Go to Siloam and wash.’ Then I went and washed and received my sight.”

Memory Verse:
“Jesus spoke to the people again, saying, ‘I am the light of the world. Whoever follows me won’t walk in darkness but will have the light of life.” ~John 8:12

Prayer:
God of revelation, Your son brought sight to a blind man. This day open our eyes so that we may see you clearly. Amen.

Reflection:
Sometimes it is hard to believe, even when you do see. I can’t say that I’ve ever experienced, or known anyone who has experienced, a miracle like the one in this story. I can’t imagine what it would be like to be blind and then to be able to see. I imagine that as the man washed his eyes with mud, slowly he saw more and more light. A sudden burst of light certainly would be overwhelming. And as he finished wiping the final smudges of mud, he realized the miracle of his restored sight. Remarkably, Jesus didn’t tell the blind man he’d be healed, and the man certainly didn’t ask for the miracle. Jesus quite simply did it. Eyes were opened that day, a lot of them.

Questions to Spark Conversation:
~Has there ever been a time when you could not see? How did you feel in that moment?
~As a disciple watching this, what might you be thinking?
~The man who was healed, we are told later in the story, worships Jesus. There is a saying that “Seeing is believing.” Would you need to see to believe?
~Jesus says in this narrative “I am the light of the world.” What does that mean to you?

Spiritual Practice:
Jesus, with mud and love, showcased the power of God’s light through a blind man whose sight he restored. We can bring light into other’s lives by sharing God’s love. For this practice, we won’t be using mud, but will be creating a mixture that feels a lot like mud. You are invited to make homemade chalk. After the chalk is dry and ready, go outside and write encouraging notes on the sidewalk, one way to “brighten” someone’s day. (To save time or prevent mess, you may use store-bought chalk.)

Homemade Chalk directions: (modified from PBS.org)
~Note: Chalk will take a few days to dry after being made

1. If you are using paper towel tubes, cut each tube in half, so it is roughly the length of a toilet paper roll tube. Cover one end of each tube with duct table to hold the mixture in.

2. Cut as many pieces of waxed paper as you have tubes, in pieces roughly 6 X 6 inches. Roll each piece of waxed paper loosely and insert it into a tube so as to effectively line the tubes. The top of the paper will be higher than the end of the tube. (You need the wax paper—-it keeps the mixture from sticking to the cardboard)

3. Pour the warm water into your bucket. Then sprinkle (this is to help have less clumping) the plaster of paris over the water and stir the mixture with a plastic spoon. The plaster of paris starts hardening within 20 to 30 minutes, so you need to work fast.

5. Stand each tube with the tape side down on a something sturdy like cardboard. To make the project easier to transport to a drying location. Pour or spoon the colored plaster of paris mixture into the waxed paper-lined tubes. Lightly tap the sides of the tubes to release the air bubbles (so you do not have holes in your chalk).