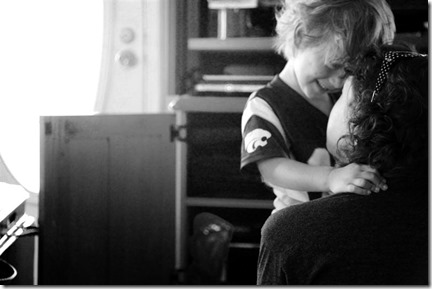 We passed a weird milestone a few months ago: My son got his own frequent flier account number. He’d turned two a few weeks earlier, so when we were booking our flights to see my in-laws and realized he was now required to pay full fare, we signed him up to get the bonus miles. It was an odd rite of passage, another number to file away and keep track off, another sign that’s he’s growing up.

He ended up in our bed the other night; he’s a light sleeper and something woke him up and he couldn’t get back to sleep. He wanted to be lying on my chest, which was not particularly comfortable, though there are worse things in the world, I thought, than being trapped underneath your sleeping toddler. But then he rolled over onto his side, and his head found the crook of my elbow, the way he had when he was an infant. His sleeping face relaxed and I caught a glimpse of the baby he was – an eternity, and not so long ago.

The way these stages keep shifting and turning…I can barely remember what my six year old was like a year ago, or when she was a baby. It’s hard to imagine that they were or will be anything other than the ages they are now.

I’m not alone in this, I know. “Tell me I’m not a bad mother,” a friend pleaded on Facebook when she was debating whether to leave her still-nursing son for an out-of-town conference. Her son was almost two, was ready to wean, and this was a good opportunity, and the timing was right, but still she wondered: Am I a bad mom?

I know that nagging she was feeling, that churning in the pit of her stomach. It was the voice saying: The time goes so fast, and you haven’t done enough, you could have done more, you are abandoning your baby and selfishly going on with your life.

I’ve heard that voice. I heard it when I weaned my own babies. Still, when I think about it – even as I write those words – that feeling comes back up, and I wonder if I’ve done enough, if I’ve been good enough, if I’ve sped through these years and missed it all.

We parents are awfully good at guilt. But what I finally realized was that it is grief I’m feeling. Not guilt. I don’t regret the choices I’ve made along the way, about how much to nurse, about how much to work, about when to leave my children with other people who love them so that I can tend to the other parts of my life. It’s not guilt that churns away at my heart when I think of those final days of nursing or when I look at my tall first-grader stepping on the school bus and realize she doesn’t even need me to hold her hand anymore.

It’s not guilt. It’s grief, and grief is a perfectly normal, healthy part of saying goodbye.

Last month, after the kids were in bed, my husband and I spent a Friday evening cleaning out what had become our junk room. (I know! Such an exciting social life we lead.) We sorted papers, moved boxes, cleaned up Barbie shoes and Legos, and wondered what the heck that thing was and where it came from. In one pile of stuff, we came across a rolled up paper banner that a friend of mine had brought to the hospital the day my daughter was born. It was hand painted by her kids, welcoming my baby to the world.

For awhile, it had hung on the wall in my daughter’s room, then in the playroom, and now it was tucked away, nearly forgotten. “We should put it away in here,” my husband said, indicating the closet where we store keepsakes and family mementos.

I knew he was right, but all of a sudden I couldn’t breathe. That’s where we put things that happened a long time ago. If we put it in there, it will mean that she was a baby a long time ago.

Which is true. She’s heading to second grade in this fall, she’s a full-on kid. We’re giving away baby stuff right and left, as even her brother has out-grown most of it. Her baby years were a long time ago.

They’re growing up. And (full-fare plane ticket aside), that’s good. It’s what I want for them – to grow up and go away from me and be their own independent people. But I will grieve all the same.

2 thoughts on “On Grief and Growing Up”