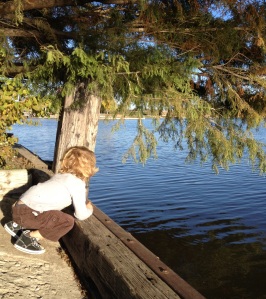 Jesus made the disciples get into the boat and go on ahead to the other side, while he dismissed the crowds. And after he had dismissed the crowds, he went up the mountain by himself to pray. When evening came, he was there alone, but by this time the boat, battered by the waves, was far from the land, for the wind was against them. And early in the morning he came walking toward them on the sea.

But when the disciples saw him walking on the sea, they were terrified, saying, “It is a ghost!” And they cried out in fear.

But immediately Jesus spoke to them and said, “Take heart, it is I; do not be afraid.”

Peter answered him, “Lord, if it is you, command me to come to you on the water.”

So Peter got out of the boat, started walking on the water, and came toward Jesus. But when he noticed the strong wind, he became frightened, and beginning to sink, he cried out, “Lord, save me!”

Jesus immediately reached out his hand and caught him, saying to him, “You of little faith, why did you doubt?”

This story makes me think of the conversation from Lewis Carroll’s Through the Looking Glass, where the Queen challenges Alice:

“I’m just one hundred and one, five months and a day.”

“I can’t believe that!” said Alice.

“Can’t you?” the Queen said in a pitying tone. “Try again: draw a long breath, and shut your eyes.”

Alice laughed. “There’s no use trying,” she said: “one can’t believe impossible things.”

“I daresay you haven’t had much practice,” said the Queen. “When I was your age, I always did it for half-an-hour a day. Why, sometimes I’ve believed as many as six impossible things before breakfast.”

A list follows, of the Queen’s six impossible things. Perhaps we all have our own lists, the ideas that come to us early in the morning (or, for some of us, late at night), when we’re groggy enough to believe that anything might happen. What is it, for you, that’s possible in those wee hours?

For Peter, maybe it was that he could walk on water. That he could do what Jesus did. This isn’t arrogance. Jesus told the disciples they’d be able to do all he did and more. This is curiosity. It’s attempt. Peter is trying. But he can’t hold it for half an hour like the Queen can. After a few moments, he stumbles; he starts to sink. Perhaps, like Alice, he hasn’t had much practice believing impossible things.

Perhaps listening to the Queen would do Peter, and all of us, all some good. Her instructions are simple:
Draw a deep breath.
Shut your eyes.
Imagine.

-What’s possible here in this scripture story? What’s impossible? (Are you sure?)

– If you were one of the other disciples in the boat, what would you have been thinking when Peter called out to Jesus? When he stepped out of the boat? Would you have called that faith or courage or … something else? Why?

– What’s an impossible thing you’ve believed? Why have you believed it?

Take a family journey to a nearby pond or lake or a backyard creek. Gather some sticks – enough for each family member to have at least one – and assign each one an “impossible” hope: a prayer, a dream, a someday-maybe- sort of wish. Toss the sticks into the water, and watch them sail away. Close the ritual with the following prayer, or one of your own.

Holy One,
Your word tells us that, with you, all things are possible.
What does that promise mean?
Give us courage and imagination, that we might find out.
Amen.

One thought on “Matthew 14: Impossible Things Before Breakfast”