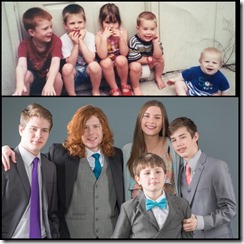 Last week, I had a dream. I dreamed that our oldest son was 5 again and I had all the knowledge of his subsequent 14 years (he’s now 19 on the verge of 20) at my disposal. I knew that he’d break his arm in the next couple of months. I knew that he would struggle to fit into a new school for third grade. I knew his first girlfriend’s name and that she would also be his first heartbreak. I knew all of the times that I’d fail as a father and yet somehow, those failures would be redeemed and he’d still turn out to be alright. And knowing all that I did, it made me cherish his 5-year-old self all the more, and brought me to a present awareness of two things: First, I didn’t appreciate then how quickly time would pass from 5 to 20 and second, how inadequate I would be in loving him fully.

Over the next week, I’d notice parents with young children in the grocery store, in restaurants, walking down the street. I kept wanting to rush up to them and say, “Cherish this time. Bask in these moments because they’re gone much, much too soon.” But then I’d feel like the Ancient Mariner with my long beard and glittering eye and they would be put upon to hear, perhaps yet again, how soon infants become children become adolescents become young men and women and begin making choices as young adults. Maybe I couldn’t really appreciate the toddler-to-child time until it was well behind me. I loved that perspective in the dream, though. I loved seeing him as the child he was and as the man he’s becoming simultaneously even though it bittersweetly reminded me that I could’ve done more.

And so without adding a serving of guilt (don’t we love guilt?) to an already full plate for parents, I’d like to briefly comment on not doing enough. Sometimes I was tired from work and didn’t want to read the same story again. Sometimes I let the television occupy his time so I could get a little respite. Other times, I was just too lazy to redirect the momentum of whatever was happening at the time. Because really, good parenting is hard work. There’s a natural inclination to telling rather than showing. It takes effort to model patience and love. Despite my failure to always show up all of the time, he’s turning into a wonderful young man. I realized that while I want to get it right all the time, I don’t have to and quite honestly, I just won’t. I don’t think many of you parents out there will get it right all the time either and I say to you the same thing: You don’t have to.

While I often forget the reference, 1 Peter writes that love covers a multitude of sins. While the word “sin” usually makes me think of dark, despicable things, I’m reminded that Paul in defining “sin” utilized an archery term for not hitting the bulls-eye. Not showing up, all the time, really is that missing the bulls-eye. So I would leave you with this: love your kids. Between your love and God’s they’ll turn out alright.