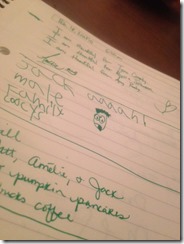 I am not giving up anything for Lent this year.

The truth is, I went through the Whole30 in January, which felt like 30 straight days of Lent without even the reprieve of Sunday “feast days.” I feel like I paid my Lenten dues, despite the fact that none of the food I gave up was in the name of drawing closer to God. Trust me, giving up sugar or coffee or cheese this month would only make me cranky, and after slogging through winter thus far, the last thing I need—the last thing my family needs—is for me to be cranky.

I told God—I did—that if He REALLY wanted me to give up something for Lent he could tell me what that might be and I would obediently give it up, but I mumbled this little prayer during what I thought might be prime-time prayer-listening for God, and I hoped he was too busy with the real worries of the world to listen to my mumbled promise. Thankfully, I received no express delivery message from God on the morning of Ash Wednesday.

Because if God wasn’t going to speak up, I had some ideas.

My daughter spends too much time in Instagram-land.

My son spends too much time in Minecraft-land.

And while they might aptly note that I spend too much time in Facebook land, I have the fallback response that my job as a health/fitness coach doing online groups requires me to be online. So there. (The truth is, there are several people in my groups giving up Facebook for Lent but just checking in with our group, so technically there is a way around my whole Facebook excuse, but my kids don’t know this little secret.)

They’re just kids, I know. And I know that I probably shouldn’t even really expect that they would give up Instagram or Minecraft for Lent. And if God didn’t send me an express mail package telling me what to give up for Lent, I suppose He may not have sent them one, either.

In spite of this not being a year of Lenten deprivation here in the Clingan household, I still want Lent to be meaningful to us as a family. I love Lent, and it’s important to me to bring a little bit of the sacred into our everyday space.

We have tried this before. One year, we made a prayer tree. Matt traced and cut out this huge, beautiful wooden tree for us to prop up against our living room wall. I printed off and cut out magnolia flowers to write down the things we were thankful for and leaves on which to write our prayer requests.

And then, for several days, we all wrote on leaves our earnest pleas for God to save our two-year-old puppy, Leia.

And then Leia died anyway.

And then the tree hung on our wall, awkwardly sparse, pointedly ignored, for the rest of Lent.

And we didn’t have a lot of faith anymore, either, after those heart-wrenching prayers penned onto those leaves seemed to be ignored.

This year, I almost dragged up the tree from its dusty corner in the basement. Almost.

Instead, I am borrowing an idea from a friend: last year they started a gratitude journal over Lent. Every evening at dinner they each recorded three things they were thankful for that day. They have continued this tradition even beyond Lent.

That night, after dinner, I explained the premise of the gratitude journal and, after refereeing a brief argument over who would write first, handed the book over to my daughter. My son sat there a moment, and then his face lit up, “Can I write that I’m thankful for BACON?!”

During this past week, as we have recorded our gratitude in our journal, I have caught a precious glimpse into the souls of my kids and my husband.

My daughter is thankful for her friends (only one of whom is from Instagram-land!).

In addition to being thankful for bacon, my son is thankful for “male” (mail), family, and “cookys” (so far no mention of Minecraft!)

My husband is thankful for his robe, his creative kids, and dinnertime.

I’m thankful for bulletproof coffee, for my silly chickens, even for a broken dishwasher and the fun, wet, towel-snapping moments with which that inconvenience has gifted us.

And I am grateful.

One thought on “Journaling Our Gratitude: Forty Days of Thankfulness”