Scene One:
My seven-year-old and I sit in front of the big window that looks out over the backyard, watching the dark gray clouds roll in. He hears thunder in the distance and muses, “It sounds like the clouds are so hungry their tummies are rumbling.”

It’s all I can do to keep from swooning. I love when my kid does this – spouts off poetry, without prompting, just because it’s how his mind works. I pull him in to hug him and when he looks at me, confused, I tell him, “It’s neat for me to hear how you think about things, like the clouds and their tummies.” 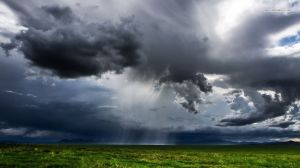 And I bury my face in my hands and groan.

Scene Two:
It’s very hot, so he and his five-year-old brother have been inside most of the day. But they’re restless, they’re bickering, so I tell them we’re all going outside to play. When they whine I tell them if it gets too hot, they can play with the hose. They go right for it. Initially – surprisingly – they actually take turns watering the garden, but it’s not long before they turn the hose on each other, waving it wildly, soaking each other, granting each other some relief from the relentless sun.

When it’s time to go in again, they’re not only wet but muddy, so I ask them to strip down on the inside porch and head to the shower. They stop together at the toilet to pee before they step in the tub to wash up, and from the other room I hear them whispering and giggling.

Then my oldest calls out, “Mom! Mom! Come here!” and when I arrive in the doorway he and his brother are both grinning from ear-to-ear. “I discovered something,” he says, and indicating his brother with a wave of his hand he tells me, “We both have hoses inside, too.”

They dissolve into laughter.

I know I cringe. I recoil. I flinch. But once I catch myself reacting – almost unthinkingly – in those ways, I wonder: What am I teaching them by my disgust? What am I communicating when they think metaphorically, analogically, and I rebuke their observations?

It takes me back to a class I taught for first-year college students, where the main course objective was to introduce and practice critical thinking. One of the activities asked the students to respond to a piece of art, a 1987 photograph by Andres Serrano that depicted a crucifix, sort of blurred, in a reddish-golden light that made it almost look like it was glowing. Student reactions were predictably pious. They offered suggestions of how the blurred nature of the photo might be a reflection on our inability to see clearly who God is or the world God desires or the real meaning of Jesus’ life and death. 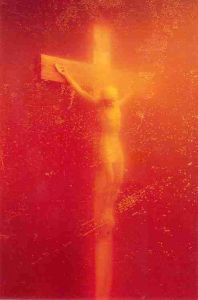 Further into the conversation, I revealed the title of the piece: Piss Christ. This changed the conversation a bit. Some were offended, while others thought it an apt description of what our contemporary American culture does to religious value. But when I told them that the title was derived from the photograph’s actual staging – that the artist had submerged the small crucifix into a jar of his own urine, and then shot a close-up of it – students were uniformly appalled. Desecration. Sacrilege.

But in interviews, the artist claims that we’re too desensitized to images like the crucifix. (1) We’ve seen it so much we don’t actually see the horror in it anymore. He wanted to shock viewers into a new perspective on a gruesome reality – and to challenge the notion that it’s the urine that makes that photograph so horrific.

What did my students miss, caught up in their offense about the treatment of the symbol? What do I stifle, refusing to let go of prudish silence about embodiment?

The photo also has an incarnational quality to it. All of us who are fully human – Jesus included – live lives comprised of flesh and bone and saliva and snot and urine and feces. These are the elements that make us up and allow us to participate in life together. We are all, always, submerged in the realities of our bodily-ness. And ever since creation, these bodies of ours have been called very good. Very. Good.

There are probably still places where – or people to whom – I’m not gonna want my boys to tell those jokes. But there is some way in which my kid’s observations about the clouds related his own small body to the body of the world, and that’s something to celebrate. There is some angle that says playing with the hose outside, and then seeing the, uh, …connections… inside, gives him a way to delight in his own being, some new reason to love it.

So I will try to laugh often, and cringe less. And maybe come to love all our bodies, my own included, more through that trying.