Growing up, I never really understood why Christian tradition put such an emphasis on the image of God as a father, not only in the Lord’s Prayer, but throughout scripture and then later in the doctrine of the Holy Trinity. As I grew older, in high school and college, I was also exposed to how the portrayal of God as masculine, or with stereotypical male traits, has too often been used as a means to oppress or control women in the Church and in larger society.

To some extent, assigning any gender to God seemed pretty illogical to me anyway. Did ancient Israelites or early Christians really think God was no more than a bipedal, four-limbed creature who just happen to have guy genitalia?  That seemed like such a small box to put God in, and so ripe for abuse by the males who exclusively ran the Church for centuries. I learned how to write about God in gender-neutral ways, and why some denominations have moved towards blessing things in the name of the Creator, Christ and Holy Ghost.  So for quite some time, the imagery of God the Father not only didn’t make sense to me, it didn’t really “work” for me. 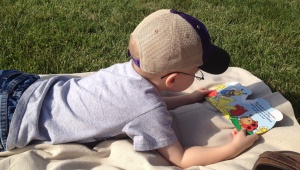 Then I became a dad, and before I knew it, I had a “Fix-It Pile.”  The Fix-It Pile consisted mostly of toys and books that one of my boys had cracked, crunched, broken, mangled, torn or effectively ruined in one way or the other.  By far, the most common casualty in the Fix-It Pile were books, which was especially painful for me. I love books, even, and maybe especially, nice children’s books. I don’t fold down corners, or leave a book open faced down. Well-handled books can last for decades. A book with a broken spine or pages falling out, on the other hand, kind of breaks my heart.

But when my younger son turned one or two, the Fix-It Pile really started growing. While he was blessed with upper body strength (careful when you get a hug around the neck with this one), this did not automatically come with coordination or dexterity. So while I was happy that he was attracted to books and love to turn their pages, it wasn’t long before I would come home to find detached covers or large page fragments of last night’s favorite bedtime story in the middle of the floor.  He wasn’t angry at the books, he wasn’t trying to destroy them, he would just excitedly pull on a page to turn it, and that long sickening tearing sound would cut through the air as I cringed. To be fair, the older boy wasn’t blameless either.

We didn’t yell, we didn’t put them in timeout, we just added the torn book to the Fix-It Pile, waiting for the day when 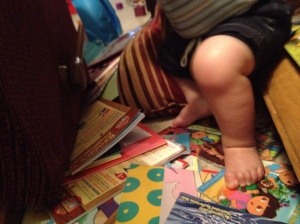 I would have time to mend it. I don’t really know why it got to be my job, other then I’m kind of cheap and I hate to throw something out if it can be fixed. But, despite my admonitions to be gentle and not step on their books, eventually the Fix-It Pile grew to more than a dozen. Eventually the boys would ask for some of their favorite titles and they were increasingly shocked and upset that their choice wasn’t available. Sometimes the damage came from the other brother through no fault of their own, and by gum, it wasn’t fair. Then one night, a new book that had just come home from a school book sale got torn even before they went to bed, and there was wailing and gnashing of teeth and pleas for its return.

So that night I sat down with the Fix-It Pile and began to mend books, looking at how tears had happened, carefully trying to match up pictures and text, choosing how and where to place tape to minimize the visibility of the damage.  Pages that had been torn out from the binding staples took the most time, as I would have to place tape over both sides of each torn-out staple hole, then use a pocketknife to unbend the prongs of the staple until they stood straight up. Then I would push the prongs through the layers of tape at exactly where they had come through the pages before, then re-bend the prongs closed, ideally without punching a new hole in my thumb. The torn or separated covers usually needed stronger clear packing tape, often just to reattach them to the rest of the book, again trying my best to make the damage as unnoticeable as possible.

The results of these repairs varied. Some books looked really pretty good. But some, while repaired and able to be read and enjoyed again, will just never quite be the same. The pages won’t lie completely flat when closed anymore. On the other hand, some of the covers, although they don’t bend the same, are actually stronger and more durable than before they were before. And a few books were just missing parts, too far gone to  be mended.

Gradually, I began to think of these children’s books as metaphors for our lives. Like children unaware of the consequences of our actions, we can really mess things up, sometimes over time with bad habits, sometimes in an instant without thinking. Despite God’s admonitions to be gentle and not step on each other, we still do, and then we wail and gnash our teeth, pleading for our lives to be restored as they once were. Sometimes we are angry at God for “letting” the sin and harm happen, even though God is no more at fault than I was for the carnage my children had wreaked up on their own books.

But like a father with a pile of torn books, God patiently and painstakingly works to mend the damage. Not always at 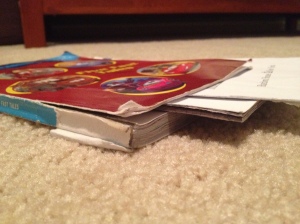 the moment in which we cry out for help, and sometimes in ways and with timing that is not our own.  But at the end of the day, I can do things and understand things that my children cannot, and God can do things and understand things that we cannot. God’s power is most often displayed, not with spectacular interventions like stopping bullets in mid-air, but with mending and healing the effects of our sin.

My boys were happy to get the repaired books the next day, and the older one may have even said thank you. I would like to say they never destroyed another book or broke another toy, but that’s not true. Many more repairs followed, but as they get older, they are learning more self-control and are more aware of cause and effect. My Fix-It Pile hasn’t entirely gone away, but as school and friends take up their days, it is starting to take different forms. And the older they get, the less they will need Dad to mend the things they care about, and the more they will need to rely on God the Father, Fixer of Torn Books.

One thought on “God the Father, Fixer of Torn Books”