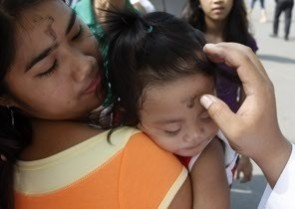 Ash Wednesday is among the worship services of the church year that I find the most powerful. The service is designed around an acknowledgement of human brokenness and mortality. Ash Wednesday embraces the idea that, although words of hope have their place during much of the rest of the year, on this day, we proclaim the equalizing truth of all humanity: “All go to the same place; all come from dust, and to dust all return” (Ecclesiastes 3:20).

I’ve led Ash Wednesday services for several years, and I find it a powerful ritual to place the ashes on the hand or forehead of my parishioners. Together, we acknowledge the brevity of life and the certainty of death while also claiming God’s promise of hope and forgiveness.

But last year was different. Last year was the first year my son attended our Ash Wednesday service. As we usually do, near the end of the service, I and another pastor invited people up in two lines to receive the ashes. My son ended up in my line. The experience of placing ashes on him was more powerful and difficult than I would have suspected.

It’s hard to put into words why it affected me the way it did. In one sense, I suppose, it is the acknowledgment of a reality that most people prefer not to think about: not only will we die, but our children will as well (and all parents pray that it will happen in that order).

But even more so, on that Ash Wednesday, I think I was most struck by the acknowledgment of brokenness. From my son’s perspective, of course, I’m sure it was just a neat or perhaps confusing experience where he may not have been thinking too much more than, “Hey dad!” But that’s often the case, isn’t it? Our children can still look at life with such hope and wonder, and meanwhile we adults want to prepare them for life’s disappointments while not taking away that hope and wonder.

It doesn’t matter if something is “a good lesson;” it still always hurts to see my children go through it. In most cases, I’ve been through it. My children have stomped in the house from rejection, lost sleep over something that happened with a friend, and yelled about how stupid they feel because they failed at something.

What is my role in it?

There’s an interesting contrast in the world of parenting today. On the one hand, you have people like
Leonard Sax or Julie Lythcott-Haims who say that children are being overprotected from pain and consequences and arrive to adulthood unprepared to handle hardship. But there is also a whole other world, described poignantly by Bruce Perry, in which children are not protected enough and experience things like neglect, sexual abuse, drug abuse, and even witness violent death.

Somewhere between these different realities, there must be a healthy (albeit uncomfortable) place where brokenness and adversity is neither avoided nor sought after but embraced as opportunity.

There are countless examples in the Bible of times when it was only in brokenness that healing or restoration took place or that God’s power was revealed. A few examples:

I’ve thought about this lesson in my own life and in the midst of struggles I see in other adults, but I don’t often think of it with children. What would it look like for me as a parent to be more attentive to leading my children to discover God in the midst of pain—over and above my more obvious role of helping them weather it?

I wonder if we do ourselves and our children a disservice with the common spiritual encouragement: “God will not give you more than you can handle.” This oft-repeated phrase is not found in scripture. It is a misquote of 1 Corinthians 10:13, which talks about temptation, not suffering or pain. (I wish it were true that people are never given more than they can handle, but as a pastor I’ve seen many examples to the contrary). This well-meaning expression of encouragement, if you look carefully, has for its goal merely getting us through or past the pain, or trying to make it seem not as bad as it feels.

But when we embrace our human experience of suffering—which is really hard and something that requires the support of parents, friends, and church—we open ourselves to an experience o

f God and spiritual growth that cannot happen any other way. It took me too long to learn that. What would it look like to teach my children this truth?

In a rare moment of vulnerability, comedian Stephen Colbert, during an October 2010 appearance on “The View,” talked about what he learned from his mother after his father and two of his siblings were killed in a plane crash. Stephen’s mother was left to raise the remaining 9 children by herself. Barbara Walters asked Colbert how she did it. His response was powerful:

She had very strong faith. She taught us to still love life and not be bitter; to realize that everybody suffers, and if you can accept your suffering then you’ll just understand other people better…and that, strangely enough, you have to be grateful for pain.

Most children seem to have an innate affinity for things like hide and seek, treasure hunts, etc. As a parent, I’ve become aware that in addition to encouraging and comforting my children in the midst of brokenness, I can also take them on a treasure hunt for God. I cannot protect them from all the storms of life. But I pray that I can, with each new broken glass or heart, teach them to expect that God will create something new.

When I put that ash cross on my son’s forehead, I promise him that there is redemption in his pain…and in mine.