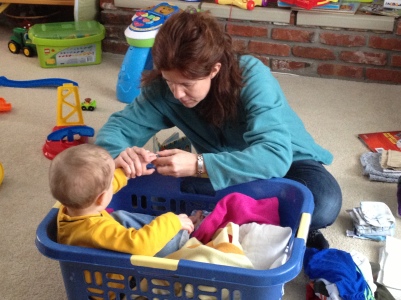 Sometimes, this parenting gig is hard to get one’s head around. It’s hard to believe the cliché that this is “the hardest/noblest/most important job in the world” when I’m engaged in the many mundane tasks that go along with having young children. I don’t feel like I am conquering the world when I’m cleaning poop out of underwear.

When my husband and I were expecting our first child, we decided pretty early on that I would quit my full-time job to care for our baby full-time. Now, I know that many moms suffer from “mommy guilt” in one form or another, especially around the decision of whether to stay home or to work outside of the home. I certainly am no exception. In my heart of hearts I know that being a full-time mom is where I want and need to be, but there has always been a tiny part of me that looks wistfully at others and their advanced degrees, or important, influential jobs. I have had this twinge that I’ve let career  opportunities pass me by.

While I am fortunate enough to have a part-time job teaching Kindermusik, and I occasionally land the paying music gig, I still couldn’t shake the feeling that I should be doing something with my life that would have a “Wow!” factor. Why couldn’t I pull off careers or successes like those other folks have? My 20th high school reunion a couple of years ago added fuel to that tiny feeling inside. My good grades and “most likely to succeed” award in high school resulted in….what exactly? Is this what I am supposed to be doing? Is this what God wants for me? Did I miss the memo?

This feeling has ebbed and flowed over the days, the months, the years, but it had never completely gone away. Then, sometimes, God gives you an experience that completely shifts your mindset. One of mine came during a sermon at our church a couple of weeks ago. A visiting pastor was there to honor the ordination of our youth pastor, but it was like God had placed him and his message directly in my path. The sermon chronicled how people in our youth pastor’s life played various seemingly small roles which helped shape and prepare him to be a youth pastor. In turn, his pastorship has had great influences on  hundreds of kids. The visiting pastor told other stories about people who had toiled in thankless positions for years, such as the firefighter whose primary role was to train volunteer firefighters day in and day out….who then was in a position to save a child from dying in a house fire. In short, God is shaping and preparing all of us, all the time, and that sometimes small things lead to big influences later on.

I don’t need to worry about missing the memo, because I am exactly where I am supposed to be. I don’t know how my current day-to-day life will influence or shape something or someone down the road, but I can trust that God’s got it under control. I can also trust that the course of my life will take shape as it’s supposed to, in the time that it is supposed to. That’s what it boils down to….trust. I needed a strong reminder to place my full trust in God, and He knew it.

I hope that other parents can know this, too, and that we can remind each other that even though we make different choices from one another, we can trust that we are where we are supposed to be. Instead of worrying about missing the memo, we can just breathe, knowing that God’s got this.