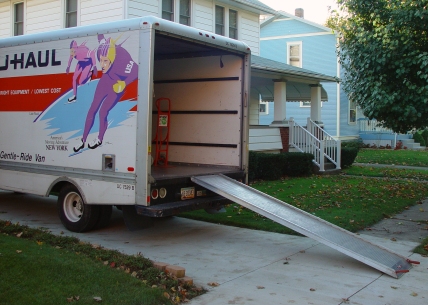 My family recently moved halfway across the country. The decision came as a combination of feeling a new calling as well as growing more and more weary of needing a plane ticket to visit family. There was an aspect of it for my wife and me that was “going home.” We have moved back to the East Coast, where both of us are originally from, after living in the Midwest for 10 years. Nevertheless, 10 years is a significant amount of time, and the Midwest had become a home as well. Leaving was no walk in the park.

But for my two children, this meant leaving the only home they’ve ever known. Neither my wife nor I ever had to move when we were young. Our parents still live in the houses we each grew up in. From the beginning, before my children knew we were moving, one of the hardest parts of the whole idea was thinking about the loss this would be for them. Because I hadn’t experienced it as a child, it felt a little like bringing them on a dark path, with no flashlight, saying, “Trust me!”

Just like everything else in family life, It has been a complicated, multifaceted experience, largely characterized by me stumbling through a process that I, as a pastor, have tried to guide other people through on many occasions. I think my children taught me more than I taught them and helped me more than I helped them.

Grief and loss is not limited to the death of a loved one, although that is one of its most difficult forms. Even we as adults don’t always recognize an experience of grief because we can’t point to a specific loss or we expect it to only follow specific events. One of the most common yet least recognized forms of grief is the loss of the life we envisioned. Most of us grow up with hopes and visions of what our life will look like, but as we age, we repeatedly arrive at moments of realization that this hope or that vision is not going to happen. That, too, is grief.

So, in the midst of this move, I went in thinking that I as a father and pastor would have to help my children navigate each step. I would listen here, guide there, and as I’ve talked about with other parents before, help them give a name to what they’re feeling and expressing.

Instead, what happened more often than not was that my children would identify what was going on before I could. Oh, I had told other parents all about this. In a write-up on grief and children that I give to families, I explain: “Children often express their grief in a way that is not recognized as grief by many adults. Grieving children may act out or change their behavior patterns unexpectedly.”

What happened when it was my turn? In the thick of dealing with contracts, realtors, cleaning, and packing, very rarely was I able to be present enough to them to recognize, name, and help. Truth be told, I was the one who ‘acted out’ and ‘changed behavior patterns unexpectedly.’ My children have done a remarkable job taking everything in stride, and not only that, teaching me a thing or two about naming our grief.

On multiple occasions, I would get frustrated at their unexplained grumpiness or misbehavior, and might ask, “What is going on?” On a number of occasions, they would actually say in response that they miss this or that friend, calling me to that proverbial “oh, yeah” moment. One or two times, they responded that they were mad at us for moving. It was during those moments that it was hardest not to take it personally and remind myself that anger is also a part of the grieving process; something I’ve told others but stumble through myself.

Mind you, this has not been frequent, and there has been plenty of excitement about the move as well. But something like a move can remind us of the truth that you learn the path by walking it. There is a good reason this site is called “Practicing Families.” It is an acknowledgement that we walk with God and are shaped spiritually by actually practicing things together, as a family. “Practice” is not just an abstract term and doesn’t always refer to a ritual of some sort, but can be quite literal; doing something again and again, learning how to do it better and better. As Mama Bear says in one Berenstain Bears book, cubs learn to do things by . . . well, doing them.

Watching my children—and myself—during this move has driven home the point that, even though we might not want to, we have to practice the negative and painful stuff too. Grieving well takes practice. Navigating sorrow takes practice. The ironic part is that it has sometimes felt as if my children are better at it than I am.

Richard Rohr reminds us that “spirituality is always eventually about what you do with your pain.” He points to Jesus on the cross as the ultimate example of this: “Jesus instead holds the pain–even becomes the pain–until it transforms him into a higher state, which we rightly call the risen life.”

Whether it’s through the sudden need for a familiar item, like a blanket, or the random mentions of friends left behind, or the exasperated question, “When are you guys gonna stop working on moving?!” — my children are practicing pain, and teaching me quite a bit in the process.