Last week my wife and I (finally) sprung for the babysitter and went to see Captain America: Civil War. I was as excited as a school boy who has seen almost every Marvel superhero movie in the theater and has the rest of them waiting in his Netflix queue. My wife . . .  was as excited as the wife who got dragged to the last two Avenger movies, who likes Robert Downey, Jr., and whose five-year old son only recently became obsessed with superheroes. Obsessed as in can list all of Batman’s enemies. As in Can’t. Stop. Talking. About. Superheroes.

We have actually been extremely protective about showing our young boys media which portrays violence (or any antisocial behavior, for that matter). We don’t have cable, they watch very little television, commercials are muted, and the media we do allow is through DVDs and streaming options we control. Unsurprisingly, their previous obsession was over Thomas, Chuggington, and Dinosaur Train. Only this year, after they had turned 8 and 5, did the boys finally get to see the original Star Wars. Then the five-year-old made a friend at preschool who loved superheroes, and started asking me questions about it. Then, on a whim while my wife wasn’t home, I showed them an old episode of The Batman. And before I knew it, weeks later we are starting Season 4. 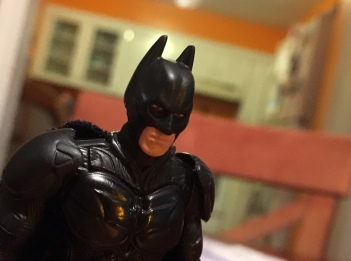 So, amidst this invasion of all things superhero in our home, my wife and I went to the movie Civil War. It was pretty good, by the way. But an odd thing happened to me somewhere between the airport fight scene and the final showdown in Siberia. The dad in me nearly hollered at the screen, “Boys! Use your words!”

In my job as a criminal defense attorney, I spend lots of time trying to modify human behavior through the courts, a mostly non-violent, albeit imperfect, system of dispute resolution. Spoken or written words are the tools of our profession and are more powerful, in the end, than weapons. On the other hand, I also spend a lot of time trying to understand why somebody did whatever they did and what they and others can do to not repeat their mistake. Many of those mistakes involve the use of violence.

And therein lies my problem with many superheroes and crime-fighters, even while I’m thoroughly enjoying watching The Batman with the kids. See, in the movies and cartoons, there are clear good guys and unambiguous bad guys. And in this sense, superhero stories serve a useful purpose in raising kids. We can talk about how there is right and wrong, what it means to be a bully, why it’s important to stand up for those who can’t defend themselves.

Real-life crime, of course, is far more complicated. In my law practice, I’ve learned that most antisocial and criminal behavior has a root cause, such as addictions or mental health. Sometimes a client’s family history plays a role, as can education, environment, immaturity and simple poor public policy. Unlike white collar crime, very few violent crimes are well thought out. So it’s no wonder that I have some level of discomfort when I realize that almost all super villains are obviously mentally ill, but are portrayed as criminals through-and-through.

The simplicity of a black and white, good-versus-evil worldview can cause us to engage in some pretty destructive practices, both individually and as a society. People (and children) rationalize their own behavior, even when they would condemn that same behavior in others (e.g., daily complaints of a brother “being mean”). As is sometimes pointed out in the cartoon, Bruce Wayne himself is acting as vigilante outside of the law, something that would never be tolerated in real life. Yet we seldom think of Batman’s crime-fighting stunts as the crimes of assault and battery themselves because of how bad the villains on the receiving end are. If that guy over there is truly and completely a villain, then whatever bad thing happens or is done to him should be welcomed and cheered, right? From there it’s not a leap to then conclude that if those people, or that government, or that country is truly and completely bad, then whatever bad thing happens or is done to them should be welcomed and cheered, right? And if the bad guys—like, Joker, Penguin, or the Riddler—are evil and violent, and we are good—like Bruce Wayne—then are we not permitted to use our own violence to stop them? Indeed, this slippery slope has huge implications today as our society grapples with what should be the limits of authorized violence and what should be the limits of violent capacity possessed by unauthorized individuals who believe they might someday be justified in using that violent capacity.

And this, of course, was the central theme of Captain America: Civil War, albeit in more cinematic, cataclysmic ways. More troubling to me, however, was how little that question was actually debated and how quickly even superhero allies resorted to violence against each other when each side believed they were justified in using that violence.

“Are we still friends?” Black Widow asks her longtime spy-partner Hawkeye in the midst of a superhero-on-superhero melee. “That depends on how hard you hit me,” Hawkeye replies. If everyone had taken the time to completely hear each other out, the ensuing catastrophe could have been avoided. Of course, if everyone had communicated well, it might have been a much less exciting movie.

In a Christian context, we are taught that “all have sinned and fall short of the glory of God.” (Romans 3:23) Christians also teach that Christ died for all of us even while we were sinners, so that every person, no matter their sin, can be forgiven and redeemed by the grace of Jesus. So the example of our superheroes and the example of Jesus seem to be almost completely contradictory. In Matthew 26, when a disciple attacks one of the men sent by the High Priest to unjustly arrest and eventually kill Jesus, he gets rebuked. You really can’t find a more justifiable use of violence than defending the Son of God in the flesh on Earth from being brutally tortured and murdered. And yet, Jesus heals the man’s ear and tells the disciple to put his sword away, “for all who draw the sword will die by the sword.” If that disciple couldn’t even use violence to save Jesus Christ, what possible reason can we hope will suffice?

Concerns about exposing young minds to violence and portrayals of violence are nothing new. It’s well documented that children who are witnesses or victims of physical violence are statistically more likely to become perpetrators of violence as juveniles or adults, something I’ve seen repeatedly in my law practice. One client’s psychologist explained to me that when children have witnessed violence, their minds accept what they’ve seen as a viable option for reacting to a similar situation, even though they may be able to identify or articulate that the violence they saw was wrong. Repeated exposure to trauma and violence can actually train a brain to react to similar situations in that same way, much like Pavlov’s dogs became conditioned to drool at the ring of the same bell that always sounded before getting fed. However, it is not so certain that fictional portrayals of violence, much less cartoon depictions, have the same effect. 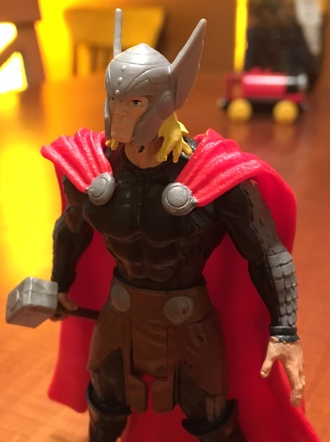 “Daddy,” he asked yesterday, “When Tony Zucco was falling, why did Robin catch him? Why did Robin and Batman not want him to die?”

“Well, that’s a good question,” I replied. “You know, Batman apparently never kills people. He only captures them for the police and then they’re taken to jail or Arkham Asylum. I guess because even though they’ve done some bad things, they’re still people. And the Bible says God loves all people. And maybe if they are still alive, they can be helped and can become a better person.”

So, that’s all I’ve come up with. I don’t want to deprive my kids of the genuine, appropriate entertainment that I myself get from such stories, but I’d still like them to be a little uncomfortable with it. If I continue to discuss and struggle with these contradictions of superheroes, if I find teachable moments in the stories amidst the entertainment, if I talk about these problems and issues with my children, maybe I can pass along my discomfort. And for a kid who can’t stop talking about superheroes, maybe that’s the best I can do—use my words.